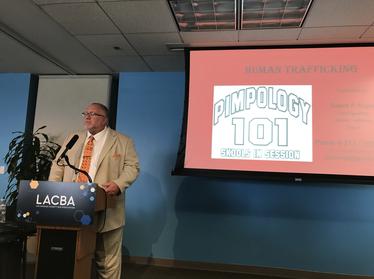 Bringing Balance to the Courtroom

In 2013 the U.S.D.O.J. starting offering grant money to local Law enforcement for the enforcement of Human Trafficking.

The U.S.D.O.J. has a 58-page grant agreement local L.E. must sign to start getting the grant money. Part of the money is then distributed to the local Prosecutor's office (this is known as a sub-grantee)

Once the LE agency accepts the money (this includes all sub-grantees) the accepting agency must comply with the contract. The grant contract for all LE in the United Stated states the L.E. agency must enforce the Human Trafficking laws according to the federal law, which states all pimping of minors shall be prosecuted as human trafficking regardless of state laws.

This grant takes away all discretion from local L.E. and prosecutors from how to charge a criminal defendant.

All prostitution is Human Trafficking

Minors prostitutes are all victims of Trafficking

The pimp caused the female to prostitute

Anything the pimp does is controlling the prostitute

All prostitutes are victims

Officers use only two methods while investigating a Human Trafficking case.

2. Opinion Based (Most common)